Rollhaven Skating Centers have been family owned and operated by the Brown family since 1990. Raising their own family while providing the best in family entertainment to the Michigan communities they serve has been an honor. In case you didn’t know the Browns, here’s a little bit about them:

This award is given to those not for the length of their service, but for the quality of their contribution. The RSAI was founded in 1937 in Detroit, Michigan to promote roller skating and establish good business practices for skating centers in the United States as well as internationally.

Danny and Kim are the owners/operators of Rollhaven Skating Center in Grand Blanc Twp., and formerly Flushing and Owosso. They were nominated and presented the award by fellow rink operators from around the world at the 2015 RSAI Convention and Trade Show held in Las Vegas, NV in May.

Danny and Kim have been members of the RSAI and actively involved since 1990, when they purchased the Grand Blanc Twp. location, adding locations in Flushing and Owosso in 2005.  In 2008, they received the RSAI’s Rink Operator of the Year award.

Kim & Danny Brown – RSAI’s Life Member Achievement Award Recipients
Danny and Kim were competitive artistic skaters for over 20 years winning numerous awards at the State, Regional and National level. Danny has been a world class competitive judge for the past 42 years. He has served on the board and is the current President of USA Roller Sports, the governing body of competitive roller skating.

Rollhaven Skating Center in Grand Blanc Twp. will celebrate its 65th anniversary in December.  This facility has been a local, family owned business and a member of the RSAI since it was built in 1955. 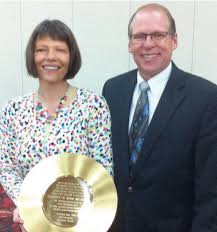 PURCHASE YOUR ADMISSION TICKETS IN ADVANCE!!!Buy your Tickets Here
+ +